Educate yourself on self care and find products to help you. Find out about the best kitchen goods to add to your kitchen. Learn more about diffusers and how they can benefit you. 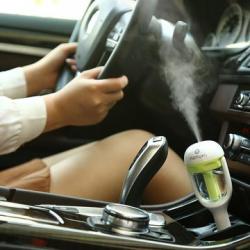 Poor air quality and pollution in cars is a severe problem in the world today. Every one using vehicles whether private or public is on the verge of being affected by pollution. It is advisable that every owner should have a car air purifier to improve the quality of air inside the vehicles.

The conventional sources of pollution you may encounter include Odors, Cigarette smoke, particle matter like dust, mold, pollen, and bacteria, Carbon Monoxide and exhausts fumes from other cars, Pet Dander, Carbon dioxide just to mention a few. A car air purifier is excellent because it avoids concentrations of pollutants. Besides, it is also helpful for asthmatic or allergic victims and gets rid of secondhand smoke.

The commonly used technologies in a car air purifier include HEPA filter, which is the best technology to remove airborne particulates and it does so safely. Another technique used is Negative ion generator – also referred to as a car air ionizer, which works by emitting negative charges into the air. Air fresheners works by masking odors in a car by introducing gases in the vehicle. Ozone Generator works by creating ozone in the air, which helps in odor removal. Activated Carbon Filter helps in smoke removal and other car fumes that can affect one’s health and breathing.

Greetings and hello and thanks for coming by the blog. In this edition we will be discussing an ultrasonic aroma diffuser and humidifiers and some of the benefits that they can have for you and your house. We will have a look at some of the different aroma diffusers and humidifiers available to you. The first we look at is an ultra-cute and adorable humidifier that is designed after a cat. The head twists on after you fill it with water and it even features USB ports on the top of the device to allow a fan to blow the humidified air around the room. Coming in 4 different colors this unit is both fun and helpful with the air flow and quality of life in the area with this humidifier in it. There are also some really fun designs out there in the shape of a cactus and different types of cats too.

If you’re looking for a classic aroma essential oil diffuser, look no further than the Devisib Bluetooth waterless unit. It is the classic columnar shape and even has an app that lets you use Bluetooth to control it. It comes from China and comes in 2 different colors. You can even have an aroma diffuser in your car. Baseus has a metal, car vent diffuser that works with essential oils and comes in 5 different styles for you to choose from. Take that fresh lemon smell with you in the car and feel rejuvenated all the time. It sits on your vent in the car like other air fresheners do but is much better than most of them. If the vent option isn’t for you, there is another spot in the console where you can put this other diffuser from Karlor that fits where your coffee normally would, in your cup holder. That is one option for the car. If you’re looking for a unique option for diffuser there are several lightbulb snow globe type diffusers that have little scenes in them. It comes in five different colors and goes for under $20.

Thank you for stopping by the blog and we hope that you’ve found something that can bless your life. If you have your own diffuser that you like, take a picture of it and send it in. We love to hear from our readers. Come back soon.

Hello and thank you for stopping by the blog. We’re very happy that you decided to stop by. In this edition we are looking at several different smart watch options and what they offer. Smart watches have gotten better and smarter as time as gone by and these watches help keep track of our heart rate and so many other things that its hard to overstate how important they have become. There was a time not too long ago that watches were no longer used for the most part. They had fallen out of favor because of smart phones and other devices that tell time for us. Now that Apple brought the watch back into style, it seems like every other company has a new smartwatch that they are offering. If you’re open to having a watch that isn’t Apple or Android, then you could be in for a great deal. There are many companies out there that offer great watches for a fraction of the price of smart watches from the bigger companies.

These smaller stores and companies often use China to build and assemble their products and they can offer them much cheaper than the bigger brands. If you use the internet to search for some of these companies or smaller sellers, then you need to keep looking past the first page or so to make sure you find a small company. The small companies that you will find if you keep searching will be looking to spread their deals and sales through word of mouth because they cant compete with the marketing dollars of the big companies. Since they don’t have the marketing money that the big stores have, they depend on repeat business and other savvy buyers to get by. One of these smaller companies is Curren and they have a smart band that monitors your heart rate, blood oxygen and blood pressure as well as your sleep and they can tell time as well. This item comes in 4 different colors and is priced economically at $50. A great deal when you consider that many of these types of watches or bands go for over $100.

Thank you very much for stopping by our blog and thank you for reading. We hope that you found something that you’re looking for. If you have a favorite smart watch or band, please let us know about it.